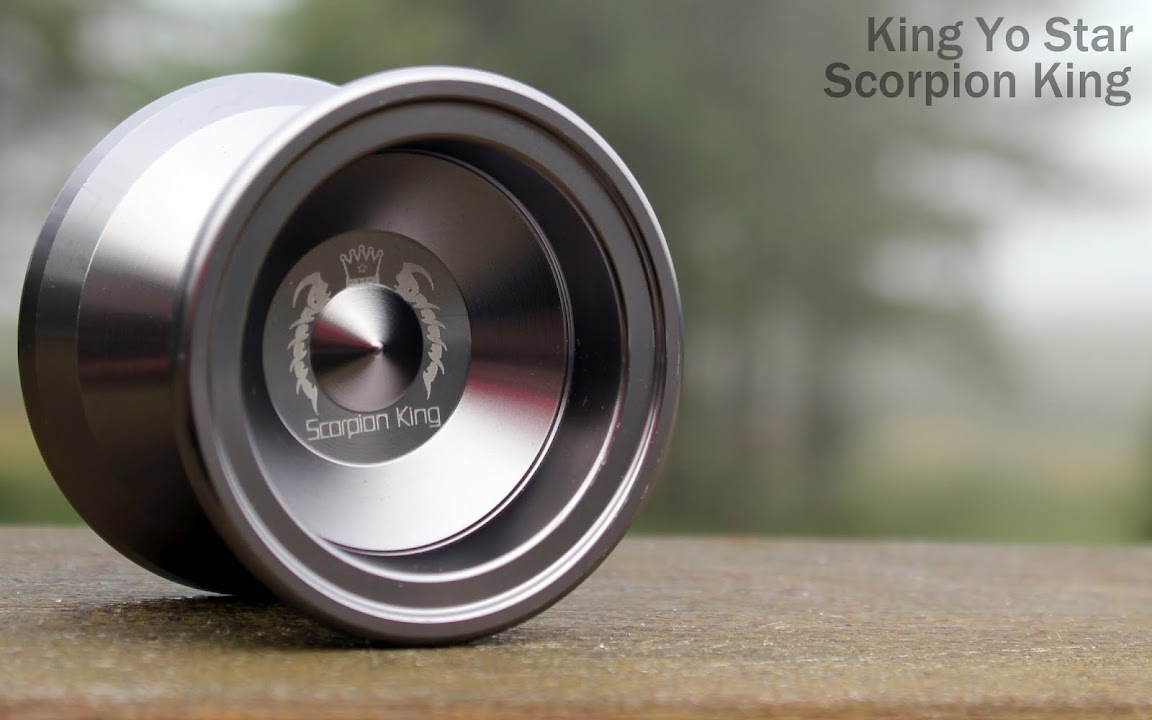 My daughter is six years old.  Being a six year old female, plus being my daughter, she has a flair for the dramatic.  This week my family and I were in Crescent City for vacation and I carried my review yo-yo the Scorpion King by King Yo Star.  My daughter is always interested in what I am carrying and upon learning the name, she then asked what a scorpion was.  I pulled up an image on my phone and showed her.  Of course the scorpion became the newest scary thing to be irrationally afraid of after that.  A year ago when my daughter learned what a black widow was, every spider was now a black widow and accompanied with a freak out dance.  Now this week, everything was a scorpion.  Thank fully a pet store on 7th Street had scorpions for sale and I was able to show here what a scorpion was.  Now I just need to find a store that sells black widows or maybe catch one in a jar.

I think that KingYoStar is a very cool yo-yo company.  They make unique throws and are always affordable.  That being said.. 72 grams of holy smokes!  72 Grams.  72.  I tend to like my yoyos in the 65-67 gram range and find anything over 68 wrist damaging.  Other than that, what we have here with the Scorpion King is a full sized beast at almost 60mm is diameter.   The Scorpion King has a short matador spike and a deep cup but almost no IRG.  I thing I would rather have had a few grams of weight removed and gain an IRG.

I love how bright the Scorpion King is.  It may just be a grey yo-yo, but the finish has a shine to it that really catches the light.  It almost comes off as a bluish grey.  One downside to a bright finish like this is that if not done a certain way, you are left with a finish that is easily marked up.  I carried the Scorpion King for a week on a makeshift belt loop and at the end, I had more marks than I would have liked.

Lastly, the bearing seat is way way way to tight.  It took a combination of a bearing removal tool and needle nose pliers to remove the bearing and that is just uncalled for.  Bearing seats don’t need to be so tight you need a vice grip to replace the bearing.  Plenty of yo-yo have looser bearing seats and still proved a solid and clean spin.

What I did like is the shape and the overall feel.  The finish is smooth to the touch, the spike is not to sharp, the angles are all precise and the yo-yo itself is easy to get a hold of.

I can’t believe this thing is 72 grams.  It plays like a lighter yo-yo and it plays fast.  The Scorpion King had a feel of deliberate movement and almost a delicate grace to it.  I was very impressed with how reliable the Scorpion King was in really milking out the end of the spin and then completing the bind to the hand.   I had a bit unpredictability on regens, but with the weight placement focused on the rims I was not really surprised.

In the end I was left with a clean and long spin, and a yo-yo that climbed on a grind.  This yo-yo is quite a bit of fun.

For all that I had found wrong with the Scorpion King design, the performance made up for it.  This was just a clean and precision focused throw all around.  The only gripe I hold to is the bearing seat.  The first thing I did when I received the Scorpion King was swap out the unlicensed concave bearing for a flat bearing.  I don’t like unlicensed concave bearings.  They don’t last and are unreliable.  Fact is that they are not legal to sell in the US anyway so for review purposes I have to remove then anyway.  With that in mind, the possibility of ruining a yoyo before even getting to really try it is mind numbingly anxious.  It took all my might to get the bearing out, and I was lucky I didn’t cause any bearing seat damage.  If King Yo Star can commit to flat bearings on their US imports and loosen up the bearing seat a bit, I would be willing to bet there would be more US vendors willing to carry their line.  I would also like to see more color options.  I have seen Grey and Gold Scorpion Kings so far, and would like to see some other colorways. This is a great, fantastic yo-yo with really only one flaw that would make it incredibly amazing.

Written by Chris “Dr. Yo-Yo” Allen who is actually incredibly afraid of scorpions