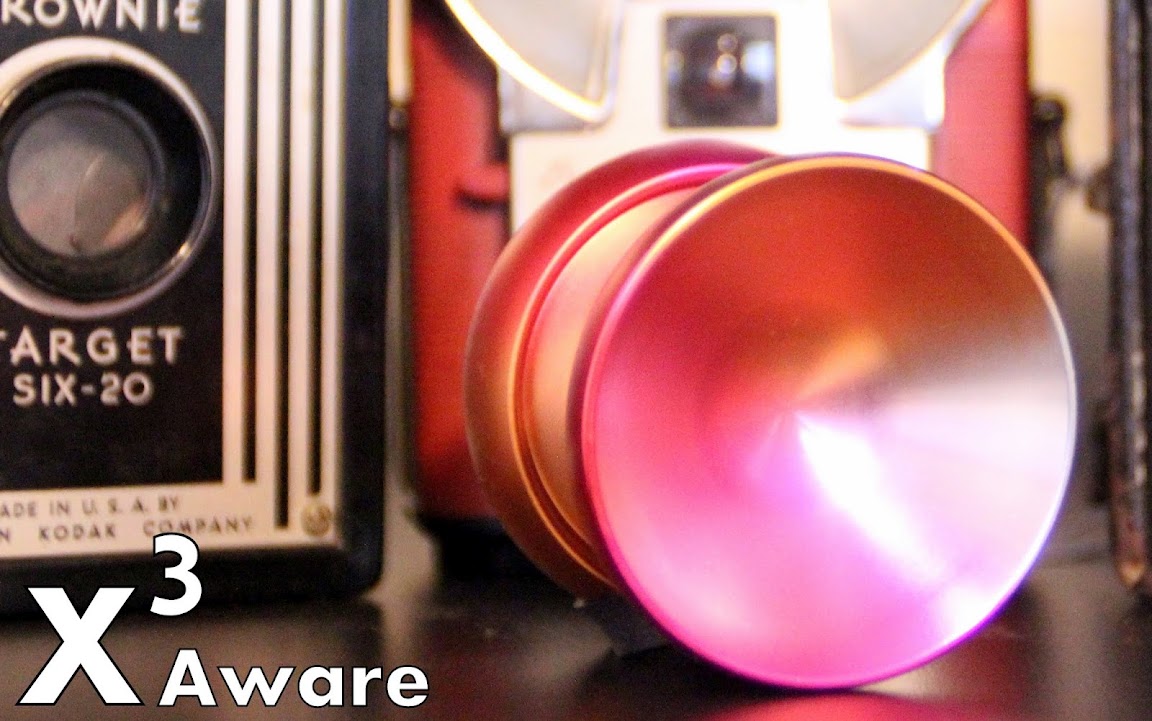 I remember when Alex (Xela) Val first told me he was going to start making yoyos.  He wanted to break the mold of popular yoyo shapes and designs.  His first yo-yo, the Steamroller, did just that.  In a public release that came before the ultra wide surge, the Steamroller was an unexpected joy that was both undersized and oversized.  A few designs later brought the Zeus, featuring the now popular inner cup and gap undercut.  Most recently Alex has released the Aware.  I remember talking to Alex about it when he leaked me the pictures.  He said it would again be different, unique, and introduce elements that are not commonly found.

Unique is not a strong enough word, this yo-yo is batcrap crazy.  The team edition seen above is a four color fade.  It looks like the initial anodize was silver, and then had a pink and orange fade done but instead of going truly half and half, the fade overlaps.  This gives us silver, orange, pink, and red.  When it spins the team edition Aware is a flickering pink with gold highlights.  The Aware does not really have an inner cup.  It has a depression where the inner cup would normally be found but there is not definition or corners.  The side of the yo-yo basically is just a shallow angled dip.  In the catch zone, the Aware has a dramatic rim focused undercut and concaved wall shape.  The two designs combined have this optical illusion effect that makes it look bigger on the inside than on the outside.  It is a yo-yo Tardis.  The response area needs a bit or reworking in my opinion.  Stock, the Aware comes with response pads that stick out past the wall just a bit.

With a weight of 63 grams I expected the Aware to play light and floaty, but I could not be more wrong.  The weight placement of the Aware gives it a fast feel that is much more solid than you would expect.  There is sort of a graceful presence to it.  Whips and transitions were flawless and the h- shape catch zone made string rejections effortless.  Horizontals were extremely satisfying.

The downside of the h-shape gap is that grinds are not easy.  It may not be a problem for players with smaller hands, but I have some pretty big sausage mitts and more often than not my finger got caught in the inner step.  I also found the response system a bit snagy.  The pads are above the response wall and I think that it is what is causing the unexpected binds.

This batcrap crazy designs is an incredible amount of fun and is a great player.   If there was one thing I would change, I would prefer flush or recessed response.  I feel that this would dramatically reduce the unexpected snags I found myself running into.    After the review I intend on pulling the pads and laying down some flowable silicone.  The Aware is a very unique design and a very cool looking yo-yo.  It helps that it plays amazing as well.

Written by Chris “Dr. Yo-Yo” Allen who going up the hill to have his howling

'Doc's Review | The Aware by X-Cube' have 8 comments