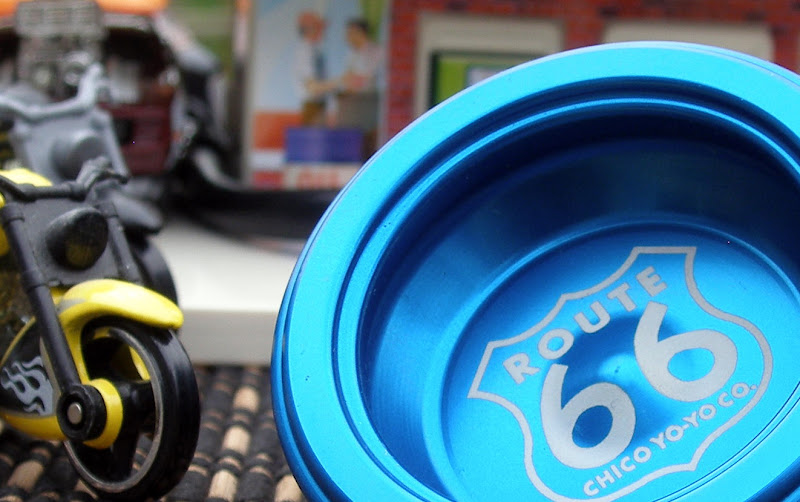 Shortly after the Chico Yo-Yo Company released the Del Toro, they put an image up of a new design that they had codenamed, the Whitewall. Over 100 comments later, the yo-yo designed with input from the Chico Yo-Yo Club was dubbed the Route 66. With stepped outer rims and bold lines, the shape was like no other yo-yo I had seen. What had the Chico Brain trust stumbled upon this time? Fresh off a CYYC Del Toro review, I was happy to carry the Route 66 for a week and provide my feedback. Where the Route 66 was concerned, we didn’t need roads… (audience groans).

I am a huge fan of Bob, Thad, and Richi. I love going up to Chico to talk to the guys about the ins and outs of the industry, new yoyos, and bounce my crazy ideas off of. When the crew started making yo-yos, I could not wait to see what they came up with. These are some of the biggest names in the industry with a long legacy behind them. I have had a chance to peek here and there at the upcoming models they had in store, but had not seen the Route 66 yet. When it arrived on my doorstep, the first thing I appreciated was the new box. CYYC was using the plastic snap box that left the yo-yo rattling around but the new box for the Route 66 was nice and large with custom foam cut out and a separate slit holding spare CYYC response stickers. The yo-yo itself was quite a sight: Full size with unique stepped rims. Inside the cup is a very bold Route 66 sign.

The Route 66 leaves nothing to the imagination as it is unlike any other yo-yo in the market. It is the first full size yo-yo that the Chico Yo-Yo Company has released, and at 53mm in diameter, it is not pretending to be anything else. Factoring in the 40mm width, he Route 66 has a nice full body feel to it with no akward bulkiness thanks to the stepped rims.
Those stepped rims really had me concerned when I first saw the Route 66, but after carrying it for a week I was surprised by how comfortable it was in the hand. The stepped rims hit the palm squarely on both sides of the thumb pad, and the gently sloped V shaped catch zone gives plenty of room for even the beefiest fingers. Matching the outer stepped rims are side rings that really push the boundaries of acceptable weight on the outer rim. I know that Thad and Richi designed the Route 66 with maximum rim weight in mind, and the result shows. You are also left with a nice deep IRG lip that offers more room than a VW Bus.
Inside the 4.5mm gap is a slightly sloped recess wall and a nice deep bearing seat. Like the Del Toro, the Route 66 has that special bearing seat post. I got a chance to speak with Thad about it and he confirmed that my previous guess (as seen in the Del Toro Review) was correct.

The finish is nice and bright. While it is not ideal for grinds, the surface is not sticky and should be fine for arm climb tricks. New CYYC high temperature acrylic adhesive backed response pads sit in the highly customizable recess well. These new pads should provide a long life and tight binds. I love the fact that the response groove fits so many different response options. This could be considered the new industry standard. A C Size bearing wraps up the internal guts of the Route 66. From CYYC, it will come with a drop of thin lube, ready to roll… (audience grown again)

I want to say that my first few throws with the Route 66 were flawless, but they weren’t. I kept hitting the string late in formations, and underestimating where the yo-yo was going to me. At 68 grams, I expected this yo-yo to play heavy and slow. Instead, I found the Route 66 to be heavy and fast. The first few days were very clumsy as I acclimated myself to the yo-yo. After some time, I was able to adjust but it seemed to take a bit longer than most review sessions. What I found was that I needed to move faster to keep up with the Route 66. Once I had worked out the timing, the Route 66 behaved exactly as expected. The massive rim weight gave the yo-yo incredible stability, which made hops and transfers worry free. The 4.5mm gap worked as intended offering a platform with more than enough room to handle multiple string wraps and still offer tight binds. The catch zone is massive, and easy to hit but I have to warn you. If your string hits the upper part of the catch zone where the steps are the string will reject out. This one flaw that can be tamed with more precision. In my opinion, the extreme stability that the rims provide make this one thing forgivable. Let me tell you, the Route 66 is stable like a classic Heavy Chevy. Thanks to the rim weight and progressive design, the only tilt I could find in the Route 66 was at the very end of the spin, and I had to force it. Smooth and vibe free, the Route 66 is joy in yoyo form.
On grinds, the Route 66 was an arm climber. The anodization finish was not intended for the Route 66 to perch on a finger, this thing is going to climb. The deep IRG is great. There were no issues running a full 360 on an IRG.

Though at first I found it to be clumsy, the Route 66 ended up being a great throw with beautiful lines. Minus the tendency to reject on sloppy landings, the Route 66 is an awesome performer. The stepped rims not only provide more rim weight, but are completely different than anything available on the market. Once you get the Route 66 moving, it does not want to stop and has brick house stability. If you can try one, do it. I think you will like it.
The Route 66 is available in multiple colors at multiple stores including but not limited to:

Written by Chris “Dr. Yo-Yo” Allen who once got his kicks on Route 66….