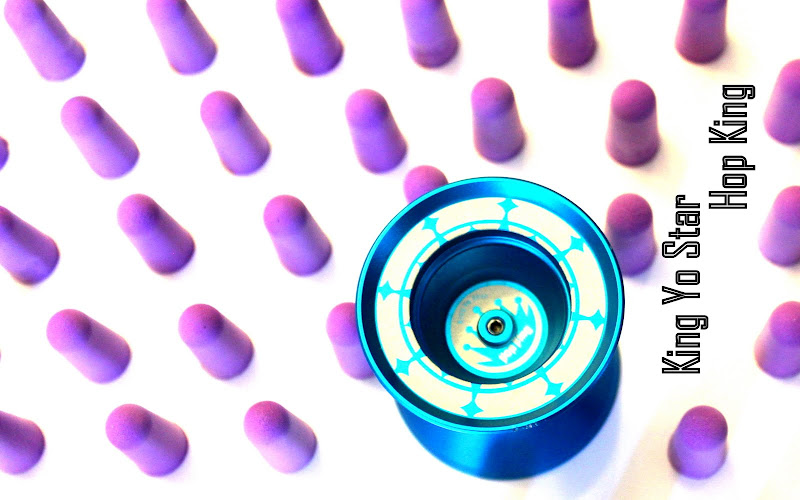 Wide yo-yos are not what they used to be. We used to consider yoyos like the HSpin Pyro to be wide. In fact, the original Pyro was TOO wide by some standards. Now we don’t just have wide, we have Ultra Hyper Platypus Sweded Wide yoyos. Top ranked players seem to be flocking to these robustly wide yoyos. Hype is build all around ultra wide yo-yos. The wider the better. It is not enough that a yo-yo is wide, now it has to be extra wide. The Hop King by new Chinese manufacturer King Yo Star is one of these ultra super alrokerpreweightloss wide yoyos.

I think this may be the most professional packaging I have ever seen from a new manufacturer. Heck, it is some of the best packaging I have seen on a yo-yo period! The Hop King comes in an elaborate white packaging with a large viewing window. On the back of the box is a very professional looking description of the product. I can’t read it, but it certainly looks good. I think it says that “Real yoyoers play with yoyos you can serve an Blue Raspberry ICEE in.” The yo-yo is centered in the box by two slotted cards. In side the box is a CD that has this video (link) on it. I did not really know what to expect on the CD but was expecting a bit more than a video that can be seen on Youtube. The more I thought about it though, the more it made sense. In the United States, I am so used to an open internet and in China, the Internet is somewhat limited and very censored. Since internet access is limited, having the title video on a disc in the box made sense. In the box the yo-yo did not look that big but once out of the box and in my hand, the yoyo seemed huge. *whispers* “its so freakishly wide”. The Hop King KYS sent me is bright blue. The laser engraving looks pretty good considering how bright the yo-yo color is. I don’t know much about laser engraving, but I imagine that it is hard to make an engraving stand out on bright colors. King Yo Star also offers the Hop King in gold. From what I could find, the Hop King is was co-designed by Chen Jia lin and Vong Kin Yan, two big name Chinese yoyoers.

There is a key marketing point with the KYS Hop King that I found very intriguing. They stated that the Hop King uses an anti vibration system that will prevent the yo-yo from developing a vibe if you ding it. The only thing I can guess achieves this “anti vibration system” is the super thin edge extending the rim. Perhaps, what KYS was trying to describe is: with a really thin edge dings will have less of an effect on the Hop King. It looks like most of the weight on the hop king is about 2/3rds up the catch zone. This is the widest part of the yo-yo wall and hidden from view is a lip for inner ring grinds. The Hop King was designed to take a C sized bearing and uses common sized response pads.
The gap is a very straight line right up until you reach the bearing and response area. Once you get near the response wall, the cap curves in and falls into the response groove. The bearing seat is a bit tight. The Hop King squeaked a bit the first few times I opened it. A very close friend of mine who is a fellow yoyoer swore to me that if I rub the bridge of my nose with my finger and then wiped the (face?) oil on the bearing seat it would not squeak. I thought he was punking me but… well, the yoyo does not squeak anymore ( I owe you a soda “C”). Pardon me while I break out the Stridex pads
One aspect of the design I am not digging is the axle. When you unscrew the Hop King, and then screw it back together, there is nothing to keep the axle in place. The hole that exposes the axle is also big enough to allow the axle to pass through it. I found the only way to keep the axle where it is supposed to be was to screw half the axle in, then hold it in place with an allen wrench tool while you screw the other half in. I an temped to use a thread lock solution to hold the axle in place. If KYS had machined in an axle cap or nub it would prevent my only design complaint.
In your hand the Hop King is very roomy and surprisingly comfortable. I was expecting the rims to dig into the palm but they don’t. The finish on the Hop King does not feel beadblasted but does feel very smooth on your skin. The yo-yo is practically an optical illusion. It looks like the yo-yo is wider than it is tall, but measuring it myself and looking at the specs, the diameter (53mm) is a bit larger than the width (50mm). Still, the yo-yo just looks huge.

I don’t know why, but I did NOT expect the Hop King to be so smooth and stable. It has a perfect mix of sway and solidness that seems to work with you as you move it through hops and transitions. This gap is huge. As if the catch zone wasn’t big enough, the gap itself is 5mm wide. This allows for multiple string wraps and kinks without having the yo-yo snap back at you. I found the Hop King to be free from wobble and vibration, and a bit loose on binds but not enough to call it slippy. It has a very fast but floaty feel to it which I didn’t expect from the 65 gram weight. The Hop King is an easy target to hit and stays in place when thrown at a tilt. I am no expert in horizontal throw style, but what I was able to pull off was easily done on the Hop King.
I found that grinds were utterly fantastic. The surface is very soft and spins smoothly on both finger and arm grinds. IRG’s were a bit of a challenge due to the size if my oven mitt hands, but I was able to pull off a 360 with ease. All in all, this yo-yo was more than high performance. This yo-yo was a surprise in quality and most importantly, very very fun.
About the Anti Vibration System, I did my due diligence and dinged the yo-yo… twice. Even with the dings the Hop King was free from vibration. Does this mean the AVS works? I can’t really say. I don’t know if the Hop King would survive a Tyler Severance style “HAMMA OF THOR” but a ding here and ding there, my experience this week showed that dings did not affect the spin. yourmilagemayvary

I completely underestimated this yo-yo. I expected it to be a simple design widened for the sake of being wide, but instead I found a serious throw with alot of fast and stable power behind it. I did not like the axle setup and the binds were a bit looser than I would have liked, but overall this was a great review week. Honestly, I was tempted to play it for an additional week, it is that good. If you like wide yoyos, you need to look into the Hop King. If you are looking for something new and different, than you need to seek out the Hop King. This yo-yo is not wide for the sake of being wide, this yo-yo is a wide power player that I think will get a lot of play time from many players once word gets out. There are not that many super ultra wicked fred savage wide yo-yos out there but this one is truly one to stand up (you may need a step stool) and notice.